working on 'the edge' in ​KUTUPALONG

The Rohingya people have faced decades of persecution and attack from the military in Myanmar, hundreds of thousands have fled the country, taking refuge across the border in Bangladesh.
​
Children on the Edge has been working in Kutupalong in Bangladesh, now the world's largest refugee camp, since 2010 and now supports education for 7,500 refugee children who are otherwise cut off from learning. 75 colourful learning centres encourage creativity and self expression with digital lessons, plenty of play and basic health support.
​ Kutupalong megacamp expanding fast after the 2017 genocide. Photo by Jack Hill for the Children on the Edge Times Appeal.

WHO ARE THE ROHINGYA?

The Rohingya are a Muslim minority group in Rakhine State, on the western coast of Myanmar. Long described as the world’s ‘most persecuted minority', the UN Advisory Commission now states that the Rohingya people ‘constitute the single biggest stateless community in the world’.

The Rohingya face continual anti-muslim persecution from the government of Myanmar who claim they are not a genuine ethnic group but are Bengali immigrants, whose presence is a legacy of colonial times. Since the 1940s, ongoing persecution, violent military campaigns and gross human rights abuses have caused the exile of over one million Rohingya people.

Since the government passed the 1982 Citizenship Act, the Rohingya people have been denied access to citizenship and subjected to grave atrocities at the hands of the authorities and local population in Myanmar. Many groups have described the treatment of the Rohingya as genocidal, yet the international community has largely ignored their plight for many years.

To escape this treatment over the decades, Rohingya refugees have made perilous journeys at sea or fled across borders, often to countries that are already impoverished and over populated, including Bangladesh.​ Until mid 2017, according to government estimates, Bangladesh was already hosting around 500,000 displaced Rohingya.
​
With the UN camps at capacity by 2005, makeshift camps emerged, but conditions were poor and unregistered refugee children had no opportunity for education. Children on the Edge worked in Kutupalong makeshift camp from 2010, providing low profile schools for 2,700 children. Rohingya refugees fleeing violence in Myanmar - Photo by Jack Hill for the Children on the Edge Times Appeal.

2017 ATTACKS AGAINST THE ROHINGYA

In August 2017, a catastrophic rise of violence and calculated ethnic cleansing in Rakhine State, Myanmar forced a further 750,000 Rohingya over the border into Bangladesh. Refugees fled into the already cramped refugee camps along the border; who were ill-equipped to host thousands of traumatised new arrivals. Hundreds of thousands ended up in the Kutupalong area, where Children on the Edge had been working for eight years.
​
The attention this drew from the international stage and the obvious horror of what this huge influx of people have endured, prompted the Bangladeshi government to finally allow international NGOs to provide services for unregistered refugees.

LIFE FOR CHILDREN IN KUTUPALONG

Children here have suffered profound trauma and, with little access to safe, child friendly facilities, they face serious protection risks including child marriage, trafficking and child labour. After generations of being marginalised, they have no expectation of the rights they deserve, no education for the future and are ill equipped to survive the daily challenges of their environment.

Without adequate support, children face the prospect of growing up without an education and without the means to process the horrific events they have lived through. 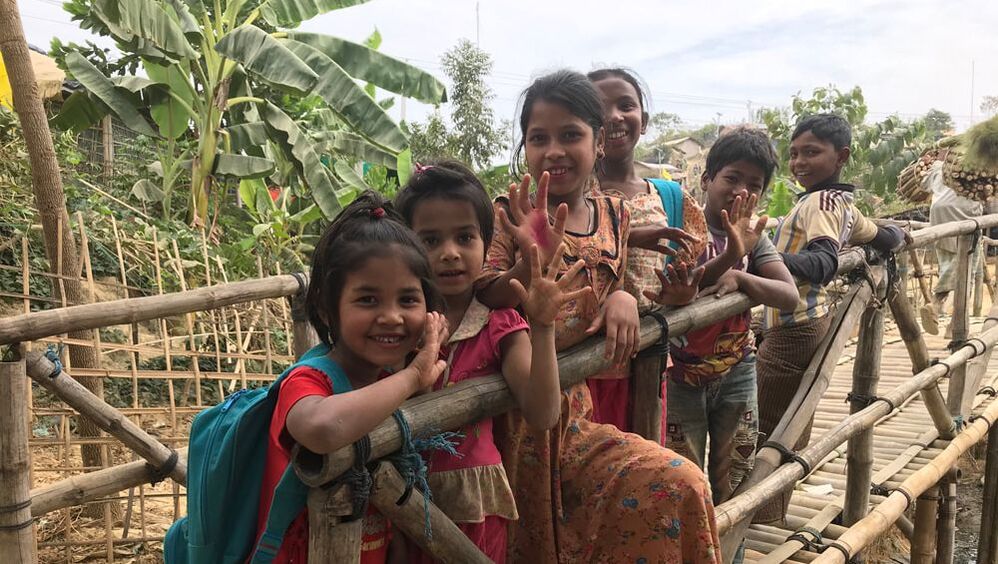 
Conditions are cramped, with an estimated 902,000 Rohingya refugees living in densely populated camps along the Bangladesh-Myanmar border, including Kutupalong. Human Rights Watch states that on average, there is just 10.7 square metres of usable space per person compared to the recommended international standard of 45 square metres per person.